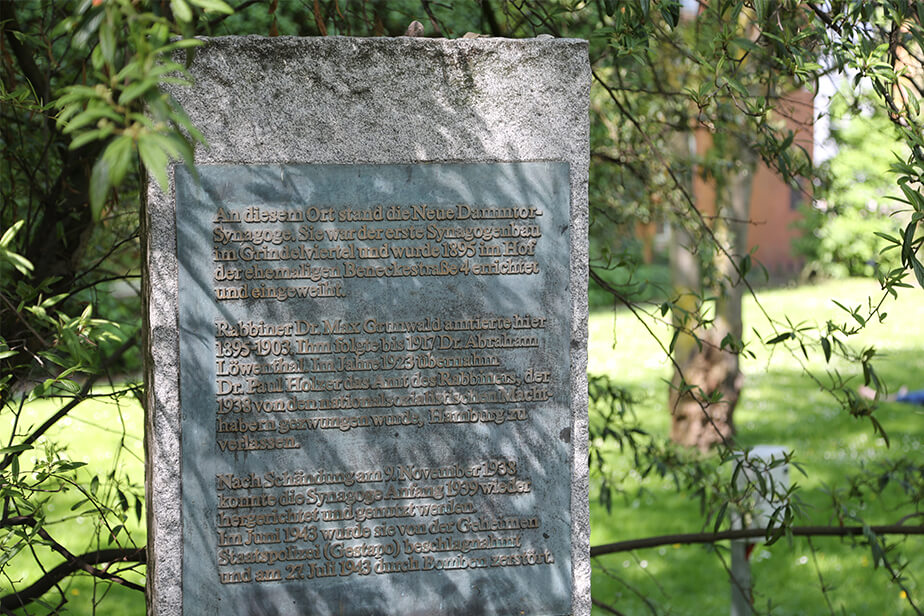 UHH/Meßner
Today, a memorial to the New Dammtor Synagogue stands where the building stood until 1943. 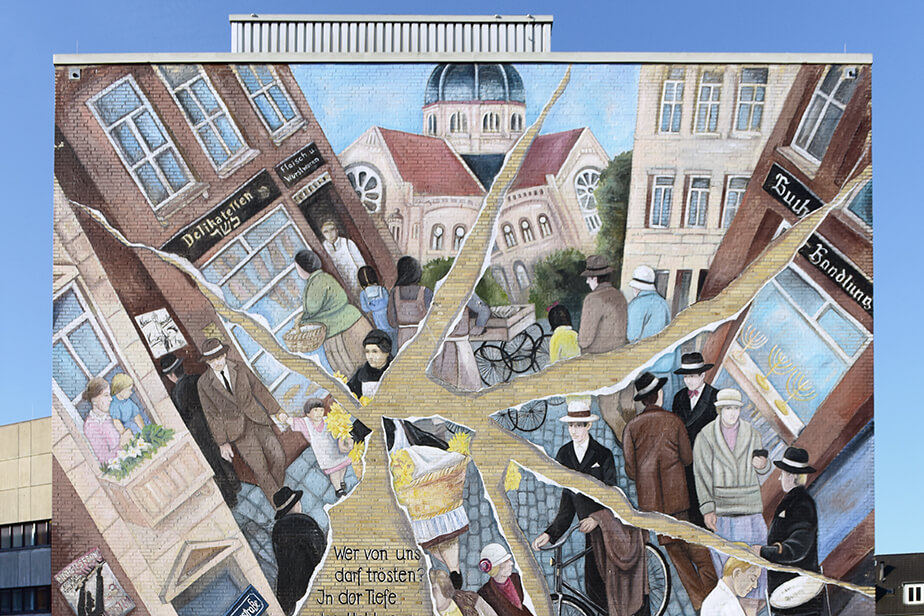 UHH/Karin Plessing/Reinhard Scheiblich
The mural by the artist Cecilia Herrero-Laffin commemorates Jewish life in the district. It was designed in 1995 and restored in 2015.

The Grindelviertel neighborhood surrounding today’s campus was the center of Jewish life in Hamburg. There were two synagogues in the immediate vicinity: the Bornplatz Synagogue and the New Dammtor Synagogue. Roughly 25,000 members of the Jewish community lived the area; there was also a Jewish cemetery. The Talmud-Tora School right next to the campus has once again opened its doors. 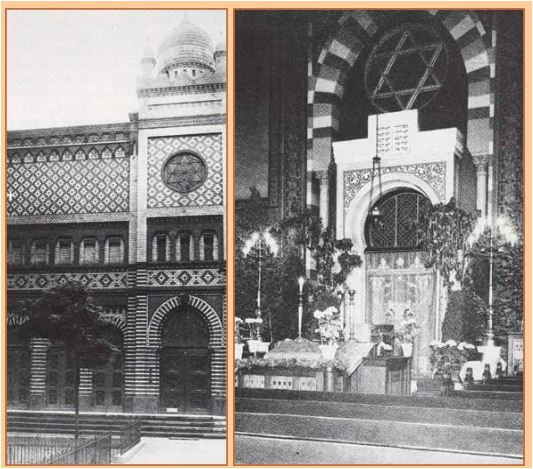 Institut für die Geschichte der deutschen Juden
The New Dammtor Synagogue was built in an Orientalist style. This is one of the few remaining pictures of the synagogue’s facade.

As more and more Jewish moved to Harvestehude, Rotherbaum, and Eppendorf between 1870 and 1930, a lively Jewish culture took root in the Grindelviertel.

The New Dammtor Synagogue was built in the neo-Islamic style in 1894/95 according to designs by the architects Schlepps & Rzekonski. It was tucked behind the Gründerzeit apartment buildings on today’s Allende-Platz and completely hidden from sight. During the November Pogrom in 1938, the interior was destroyed. It was rebuilt using private funds and once again used for services.

In June 1943, the National Socialists confiscated the synagogue. Shortly thereafter, the building was destroyed in the bombing of Hamburg. The memorial to the New Dammtor Synagogue was erected in 1995. 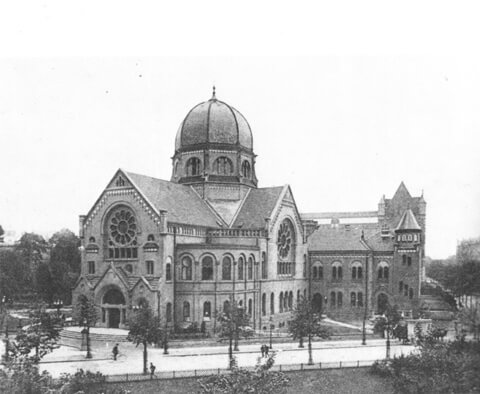 Public Domain
The Bornplatz synagogue was Hamburg’s main synagogue until 1939.

Hamburg’s main synagogue at Bornplatz was consecrated in 1906. It was the first synagogue in Hamburg openly facing a public street. It seated 1,200 and boasted a cupola that reached 40 meters in height. The synagogue was laid to waste in the November Pogrom in 1938. In spring 1939, the Jewish community was forced to sell the property to the City of Hamburg for far below its market value.

Ultimately, in 1939, the synagogue was torn down. The Jewish community was forced to pay the costs for its demolition. 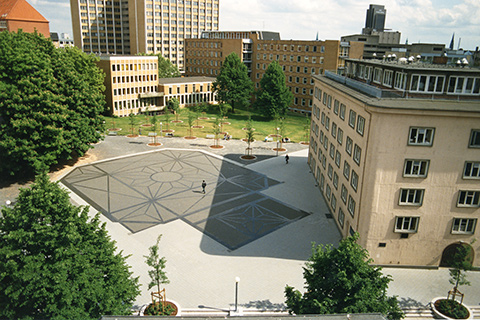 Margrit Kahl
Fifty years after the building was destroyed, the place where it once stood was redesigned and renamed Joseph-Carlebach-Platz—after Hamburg’s last chief rabbi under the National Socialist regime. A ground mosaic designed by Martin Kahl in 1988 commemorates the synagogue. The mosaic outlines the floor plan and the rafters of the synagogue.

Another place that connects Jewish history and Universität Hamburg is the Platz der jüdischen Deportierten at Moorweidenstraße next to the West Wing of the Main Building. It is a small but easily visible grove in the middle of Hamburg. Deportations to ghettos and concentration camps began on 25 October 1941.

Today, Jewish life is reinvigorating the district. Today, there are roughly 4,000 Jewish residents of the neighborhood around the Von-Melle-Park Campus. In addition to the synagogue on Hohe Weide street, there is also a primary school, the Talmud-Tora School, and cafés serving kosher food. 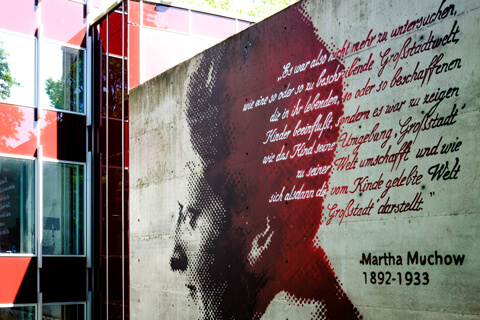 UHH/Denstorf
The Department of Education library is now named after Martha Muchow. Muchow was a close colleague of William Stern. In 1929, she became a senior member of the academic staff at the Psychological Institute. She was dismissed from all offices in 1933 and died only a few days later as the result of a suicide attempt.