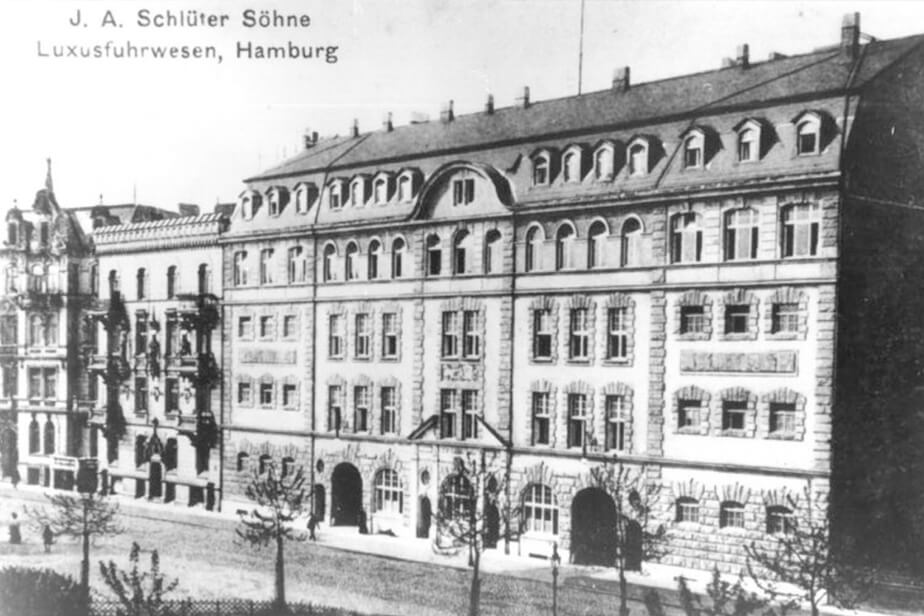 Arbeitsstelle für Universitätsgeschichte
Before the building at Allende-Platz 1 was used by Universität Hamburg, it was used by a wagon manufacturing company to house its horses and carriages. It was built in 1908 and has been part of the University since 1928. 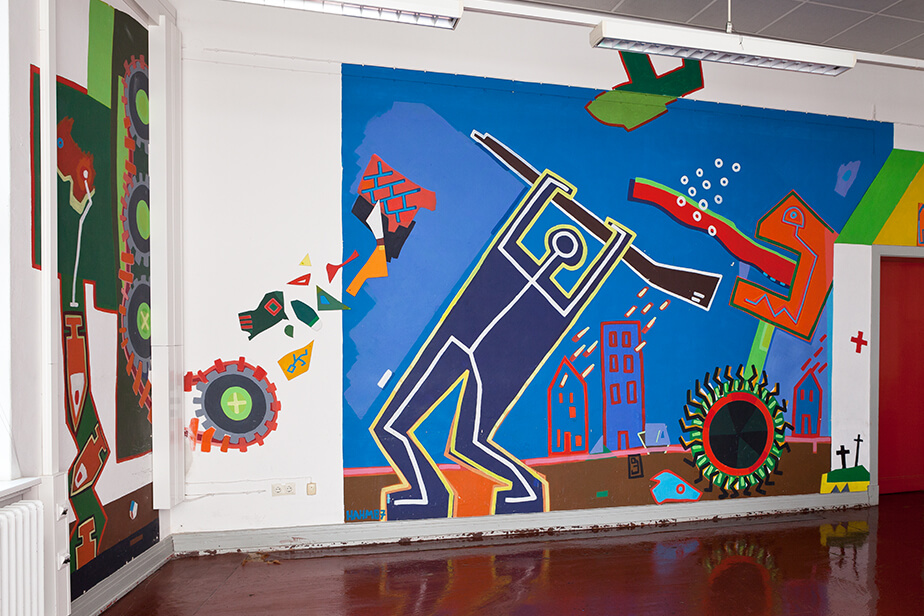 From stable to academic institute

The building on Allende-Platz is the oldest building on the Von-Melle-Park Campus; it is also fondly known as the “Pferdestall” or “horse stable.” Until 1928, horses really were kept where today the political and social sciences have found a home. Up to 200 horses were stabled on the building’s first floor. On the fourth floor, there were apartments “for the master craftsmen in the company’s various departments”—according to an article in the newspaper Hamburger Nachrichten on 17 April 1908. 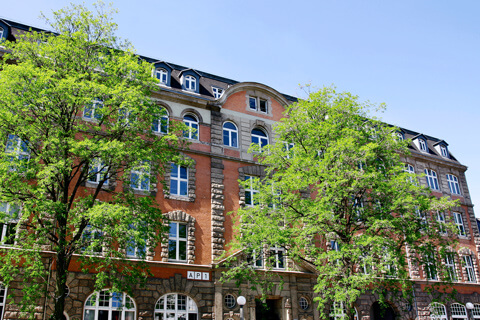 UHH/Baumann
The Pferdestall today There is a relief above the building’s main entrance that depicts a carriage; it hails from the period in which the building was still housing horses and carriages.

The Pferdestall today. There is a relief above the building’s main entrance that depicts a carriage; it hails from the period in which the building was still housing horses and carriages.
The now-listed building at today’s Allende-Platz was built in 1908 for the Hamburg wagon company Schlüter & Söhne. Just twenty years later, the firm went bankrupt and had to sell the building.

This was a lucky break for the University, which had grown exponentially in the 1920s. The Hamburg Senate therefore decided to strike while the iron was hot and bought the building in 1928 for 500,000 Reichsmark. Subsequently, the building was refurbished “for higher education purposes.”

Big names at the Pferdestall

The University moved into the building in Winter Semester 1929/30. At the time, the address was not Allende-Platz 1 but Bornplatz 1–3. At first, the building was used to house the social sciences, German studies, psychology, and education. Famous Jewish scholars such as Ernst Cassirer, William Stern, and Agathe Lasch taught and researched here until they were expelled by the National Socialists in 1933. 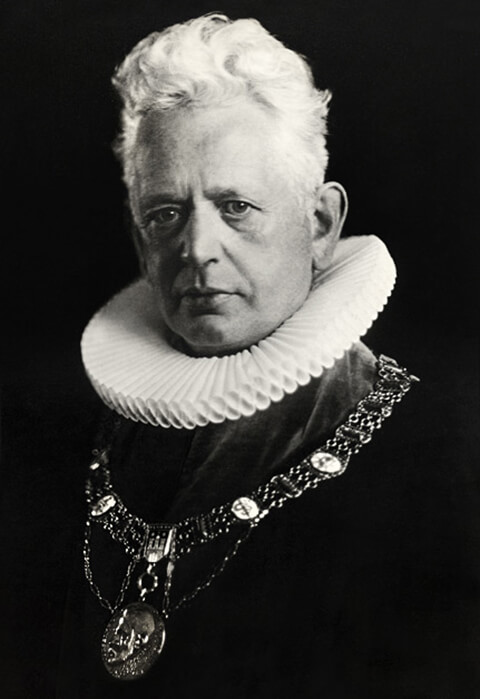 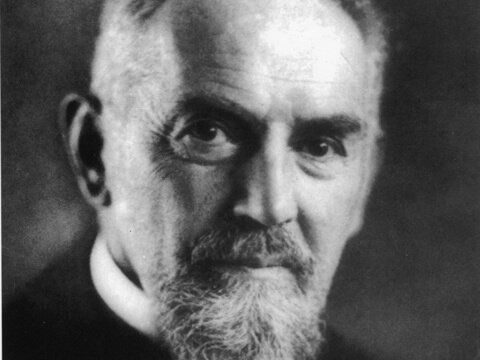 Under the National Socialists, life at Bornplatz and the Pferdestall changed dramatically: Numerous scientists and scholars were forced to flee or persecuted, and during the nationwide November Pogrom in 1938, the Bornplatz Synagogue adjacent to the Pferdestall—Hamburg’s main synagogue—was severely damaged; ultimately, it was razed.

During World War II, the basement of the Pferdestall was used by Hamburg’s Jewish population as a shelter. They were not permitted to use the massive bunker across the way; this was reserved for non-Jews only and is now a part of the University. 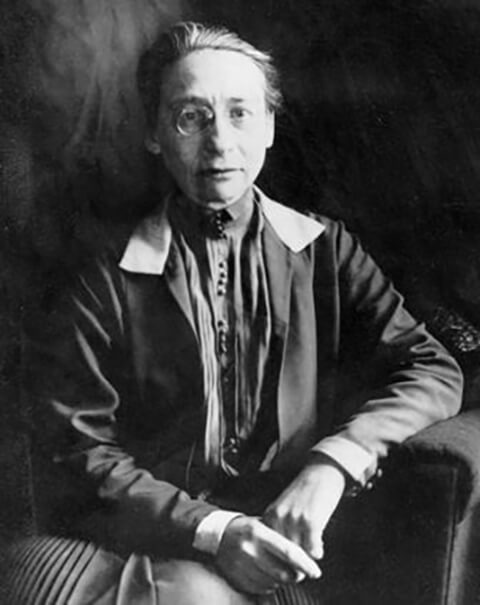 Arbeitsstelle für Universitätsgeschichte
In 1923, Agathe Lasch was the first female German studies scholar, both at Universität Hamburg and in Germany, to be awarded a professorship. She was a victim of National Socialist persecution and was murdered in 1942 in Riga. Today, a lecture hall in the Main Building is named after her.

In the 1980s, the artist Constantin Hahm turned his attention to the building’s eventful history. From 1985 to 1988, Hahm designed murals for the stairways and corridors that reflect both the past and present. The murals, initiated by the Department of Philosophy and Social Sciences, were created following a competition held by the Ministry of Culture. 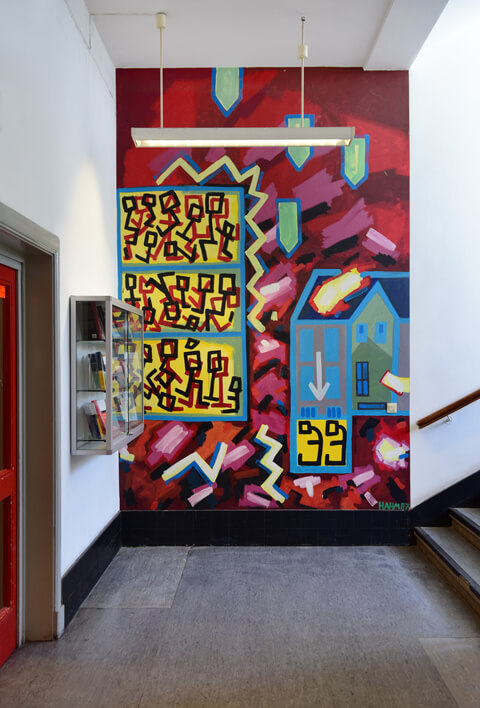 UHH/Karin Plessing/Reinhard Scheiblich
One of the murals by Constantin Hahm Using a colorful, accessible, comic-book style, Hahm created scenes depicting the Pferdestall as a place of refuge for the “non-Aryan” population during World War II.