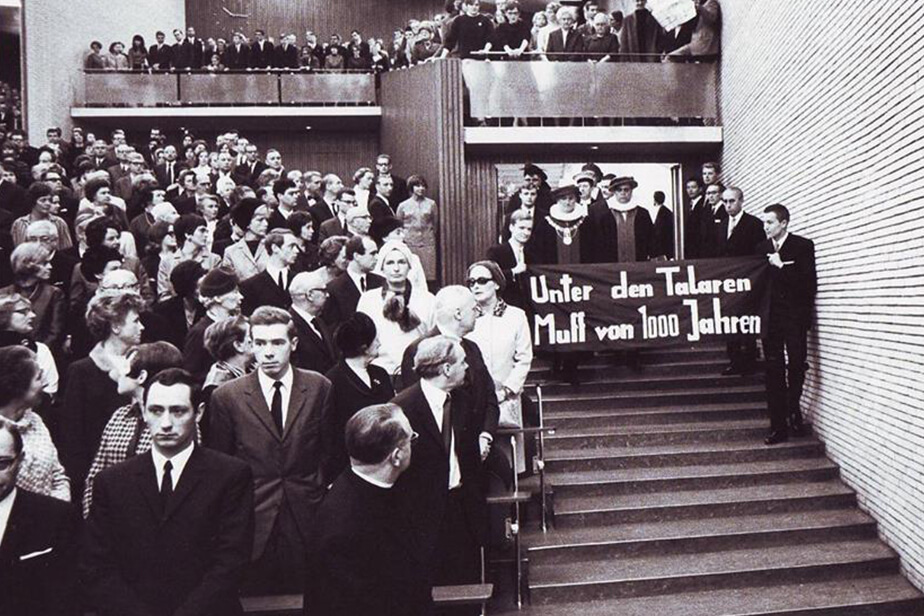 Arbeitsstelle für Universitätsgeschichte
On 9 November 1967, two students ushered in the end of the traditional university hierarchy when they unrolled their banner with the J’accuse: “Under these robes—1,000 years of rot!” 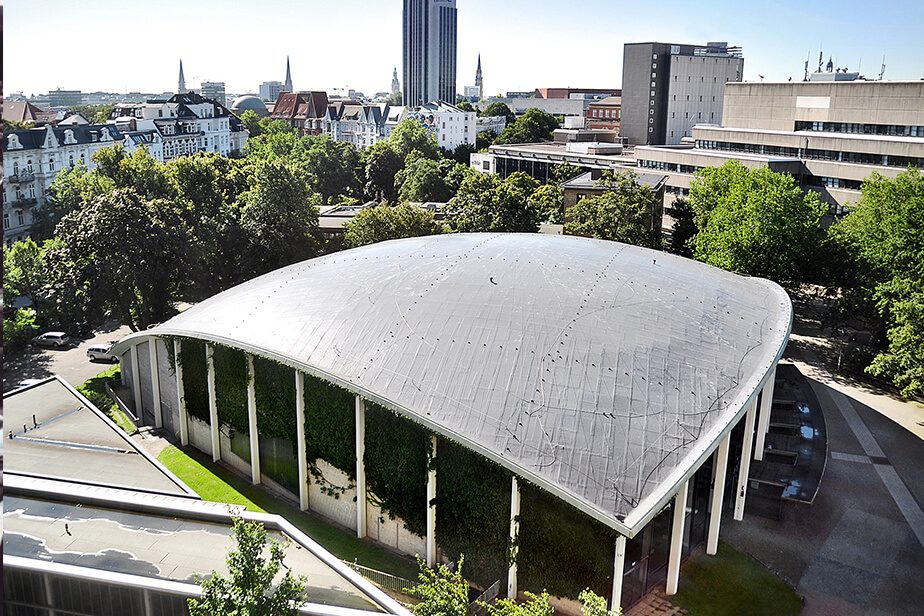 UHH/Schell
The Audimax was designed by the architect Bernhard Hermkes: the domed roof is 58 meters in diameter.

“UNDER THESE ROBES—1,000 YEARS OF ROT!” A FAR-REACHING PROTEST

On 9 November 1967, law students Detlev Albers and Gert Hinnerk Behlmer stole the national limelight with a daring protest during the inauguration ceremony for the University’s rector: as the professors strode into the Audimax and past the 1,700 guests, Albers and Behlmer unfurled their denunciatory banner: “Under these robes—1,000 years of rot!”

Although Hamburg was not as pivotal as Berlin or Frankfurt am Main in the German student protest movement of the 1960s, this denunciation of the authoritarian university hierarchies soon became legendary and their stirring slogan became the trenchant rallying cry for the entire movement.

There were no repercussions for the two students in Hamburg, but the University soon changed fundamentally: in 1969, Universität Hamburg became the first “reform university.” This marked the end of a university run solely by full professors. The rectorship was abolished and a president was elected by representatives from all University groups. 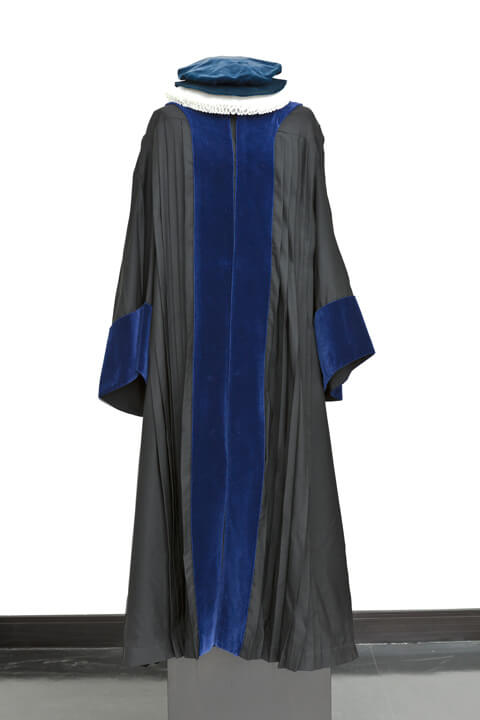 Arbeitsstelle für Universitätsgeschichte
In 1927, academic gowns were introduced as official dress for the University’s professors. Effective immediately, all full professors (or chairs) donned gowns with velvet cuffs and collars in the colors of their respective faculties.

The down with gowns protest was not the only instance of agitation at the University during the student movement. In 1968, students also toppled two monuments: in the night from 31 October to 1 November 1968, students felled two monuments dedicated to the colonial officers Hermann von Wissmann and Hans Dominik. The Wissmann Memorial had been erected in 1922 on the east side of the Main Building; the Dominik Memorial in 1935 on the west. 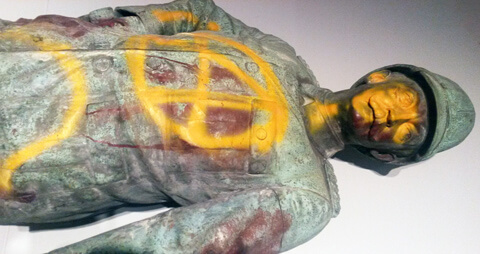 UHH/Zimmerer
In 1968, students toppled the memorial to the colonial officer Hermann von Wissmann erected in front of the University. For a long time afterwards, the memorial was stored in the observatory in Bergedorf.

Along with its new self-image, the “reformed” University took a new approach to its own history. Universität Hamburg began to scrutinize its Nazi past. In 1971, a bronze plaque was placed in the lobby of the Audimax to commemorate students who were members of Hamburg’s White Rose resistance movement and who paid for their opposition to the Nazi regime with their lives. 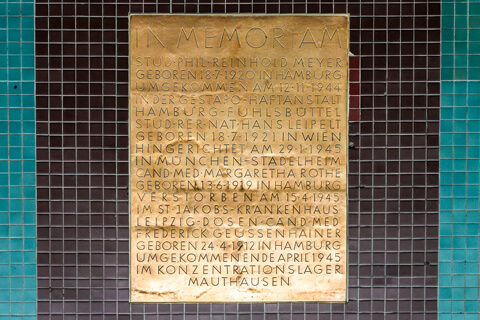 In the 1970s and 80s, several legendary concerts and cultural events took place in the Audimax. In addition to the comedian Otto Waalkes, bands like Pink Floyd and AC/DC have graced the Audimax stage. 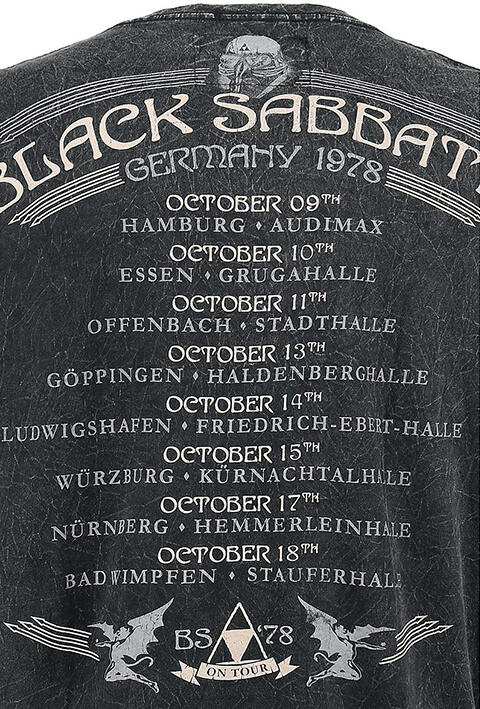 Especially in the 1970s, the Audimax was a special hot spot for music in Hamburg. A host of big names and famous bands performed here, including Kraftwerk, B.B. King, and Black Sabbath.

The Audimax is not only a symbol of political awakening; it is also stands for architectural renewal. At the end of the 1950s, its triangular floor plan, spectacular glass facade, and domed roof were radically new, designed to reflect German post-war aspirations.

The reinforced concrete construction was designed by the architect Bernhard Hermkes and completed in 1959. The roof’s cement casing in the form of a spherical sector is only 13 cm thick and has a span of 58 meters. Today, the Audimax is a listed building. It was modernized in 2002–2003 and 2007; in 2008-2009, the roof construction was renovated. 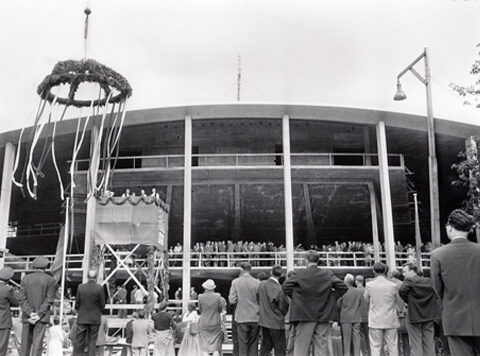 Arbeitsstelle für Universitätsgeschichte
The Audimax was built from 1957 to 1959. It seats 1,700, making it the University’s largest space for courses and events.