Responsibility
Like all other German universities, ours was complicit in National Socialism. After 1945, many Germans wanted to forget the recent past. Thus, nobody in Hamburg or at other universities was taking a critical look at what had happened. It was only fifty years after the National Socialists took power that the University management felt compelled to have its own National Socialist past closely examined. Nonetheless, it was one of the first universities to assume responsibility for its past— thanks to the efforts of a new generation of students. Studying at the end of the 1960s, they began to question how fellow Germans remembered the Nazi past and the role of their own professors. Thus, they paved the way for a long-overdue reckoning and culture of memory.
0901

Tight-lipped about the past

Up through the 1960s, a generation of professors, not a few of whom had begun their own careers under the National Socialists, shaped the way the people saw the past. Only a handful of those academics who had been hounded into exile chose to return. On the other hand, professors who had had ties to the National Socialists or initially been suspended following the war were quickly rehabilitated. One of the few who openly opposed this practice was the Hamburg professor of medicine Rudolf Degkwitz. When he called for radical denazification in 1948, he was ignored. 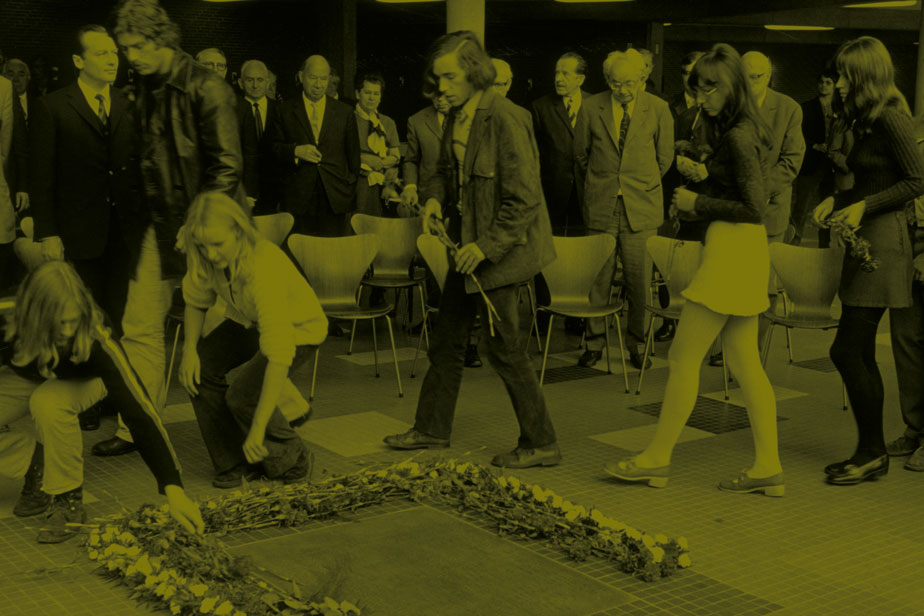 The university works through its history

All departments took part in the Hamburg research project on the history of the University under National Socialism. More than fifty academics from the University researched the history of their respective disciplines, creating a nuanced portrait of daily life at the University in the Third Reich. In 1991, the results were presented in a 1,500-page publication and public exhibition. The project led to the Center for the History of Universität Hamburg, a series of papers, and the naming of lecture halls after persecuted academics.
0903

National Socialism profoundly changed the University and inspired very little or noteworthy opposition. For example, the University’s self-governing bodies were replaced by the “Führerprinzip” and the University publicly presented itself as “Germany’s first National Socialist University.” The Civil Service Restoration Act allowed the University to let go of over ninety of its members, including prominent scholars, for “racial” or political reasons. Significant areas of research thus lost in importance. Instead, new politically motivated fields such as the biology of race or military science took their place.
0904

Opposition to the reinstatement of Nazis

With this letter, Rudolf Degkwitz announced his resignation as professor of medicine and director of the Eppendorf Children’s Hospital. He resigned to protest the lack of de-Nazification measures at the University. He himself had been accused of sedition by the Nazis in 1944. 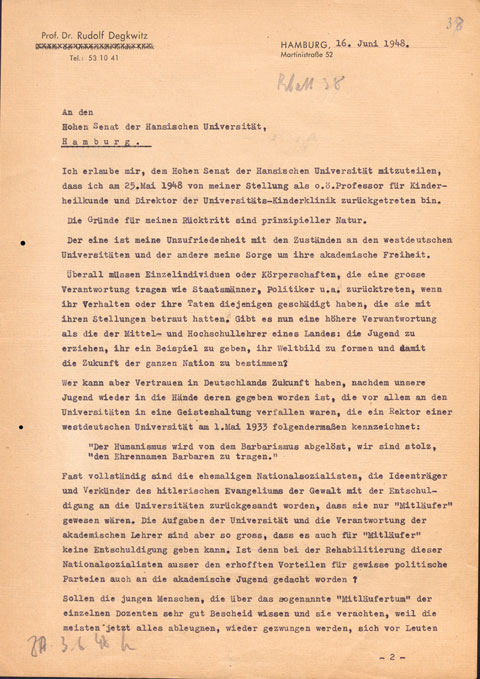 The University and the higher education authority debated the appropriate reaction to Degkwitz’s letter. It had caused a public stir when the press reported on it under the title “Resignation on Principle.” Ultimately, the University leadership went no further than to distance itself from Degkwitz.
Reply from the University rector to Prof. R. Degkwitz, facsimile 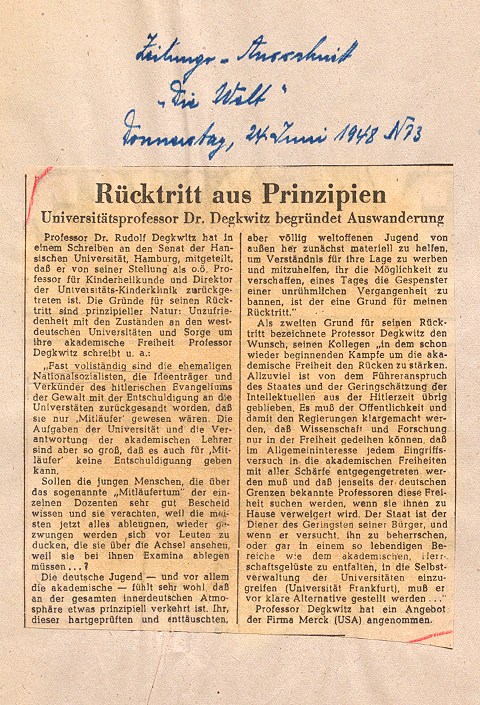 Failure to confront the past

The University student council, ASta, published a refutation to the Festschrift in 1969. Students contributed articles about the University’s National Socialist history and demanded that the issue be confronted.
Das permanente Kolonialinstitut. 50 Jahre Hamburger Universität, 1969 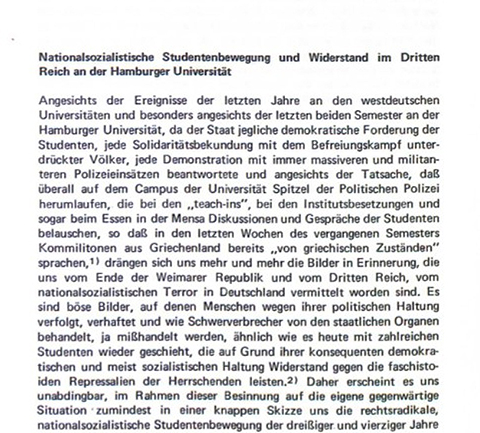 The results of the investigation about the University in the Nazi era were not only presented to the public in a book. They were also on display in the exhibition ENGE ZEIT, opened in 1991 in the Audimax. The exhibition centered on University members who were exiled and persecuted. 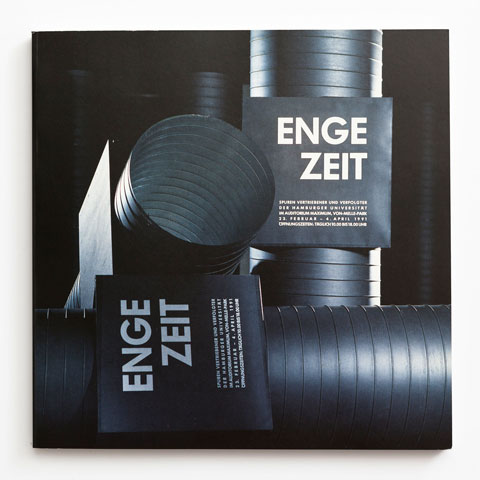 An in-house series for academic history

What began as a plan to publish the results of the investigation into the Nazi-era history of the University led to the formation of the University’s own publication series in 1986. It is overseen by the Center for the History of Universität Hamburg, and has published twenty-six volumes. Topics range far beyond the Nazi era.
Hamburger Beiträge zur Wissenschaftsgeschichte, 26 volumes, 1986–2019
0911

Presentation to the public

Concurrently with the opening of the exhibition, the three-volume Hochschulalltag im ‘Dritten Reich’ (University Life in the “Third Reich”) was introduced to the public. Speakers at the event included the sociologist Lord Ralf Dahrendorf from Oxford and Hamburg’s second mayor Ingo von Münch.
Opening of the exhibition ENGE ZEIT, speaker Ingo von Münch, 1991; Eckart Krause presents the three volumes of Hochschulalltag im ‘DrittenReich,’ 1991
0912

A memorial plaque for members of Hamburg’s White Rose

In 1971, at the urging of the student council, the University finally signaled its willingness to commemorate the years between 1933 and 1945. There is a floor plaque in the Audimax, commemorating students murdered by the Nazis. They actively opposed the Nazi state and were closely affiliated with the White Rose in Munich.
Students frame the memorial plaque with red carnations, 1971
0914

Students put on the pressure

Starting in 1931, the National Socialist German Students’ League made up nearly forty percent of AStA, the student council. By 1933, the League had become the prime mover in the efforts to enforce political conformity at the University. It demanded the dismissal of Jewish instructors, and the University complied by forcing them to cancel their lectures.
Letter from the League’s University Gruppenführer to Senator F. Ofterdinger, 12 April 1933, facsimile
0915

As rector, Adolf Rein moved forward with the restructuring of the University between 1934 and 1938. However, due to internal rivalries, the professor of colonial history was unable to implement all of his plans. His “political college,” for example, in which he intended to coordinate political indoctrination with Nazi organizations, never came into being.
Organizational chart for the structure of a political college by A. Rein, 1933 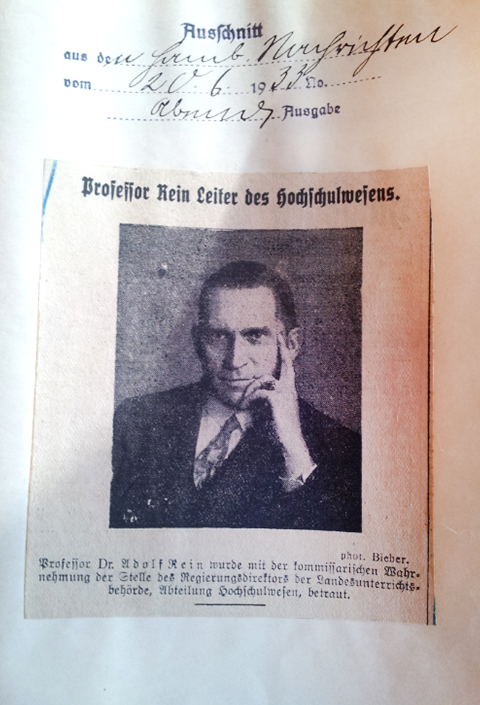 Universität Hamburg, Universitätsarchiv, HStA 361-6 IV 1161, Bd2, Beiakte 5, 6
Newspaper clipping on the appointment of Adolf Rein to the post of Head of Higher Education at the State Teaching Authority; Hamburger News 20.6.1933
0916

The idea of a “political university”

After 1933, Rein took the lead in restructuring the University. He had made a name for himself in 1932 with his plans for changing the University to conform to Nazi ideals. He pursued the idea of a “political university,” in which scholarship would be subordinate to political principals. 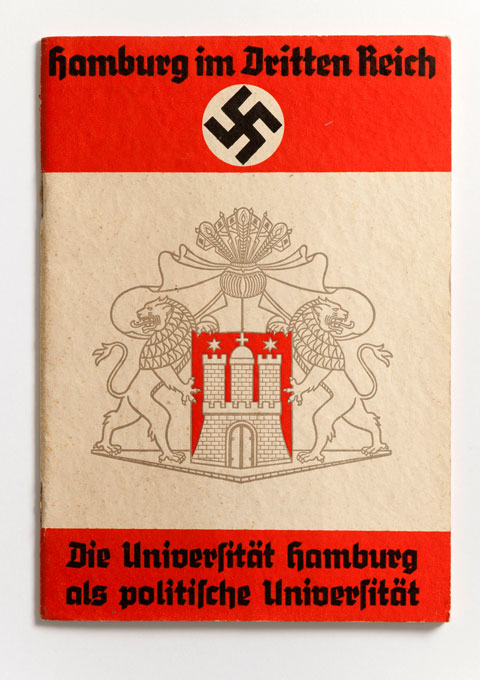 A “political association of the faculties” first founded in 1933 was designed to prepare a curriculum for political classes. It was to be given the rank of a faculty and thus have its own dean’s chain of office. The new faculty never became a reality, and therefore this medallion remained a preliminary design. 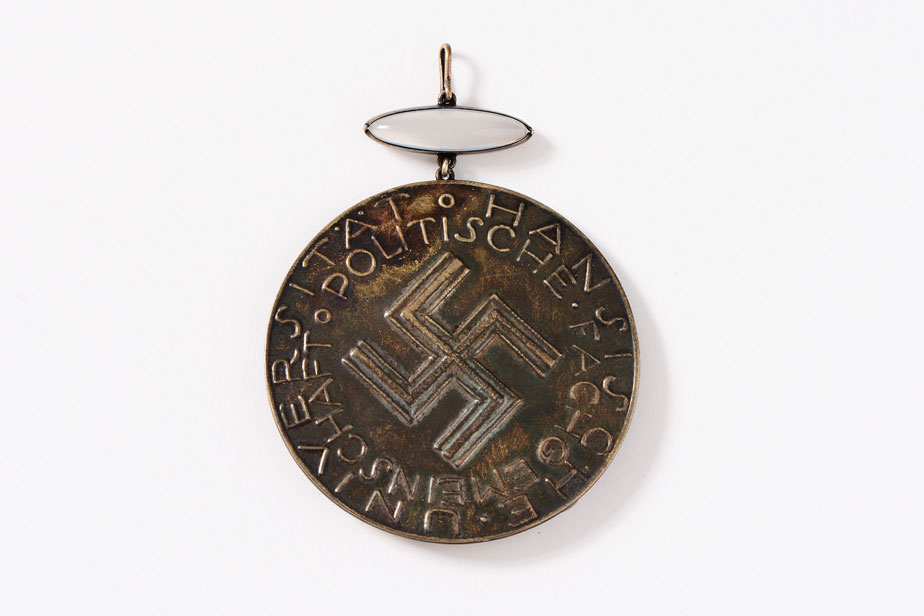 The University’s four original faculties’ chains of office for the deans in 1921. The symbols used in their design had a long tradition, some reaching back to antiquity. The 1936 medallion for the new political faculty, on the other hand, used the new political symbol of the swastika. 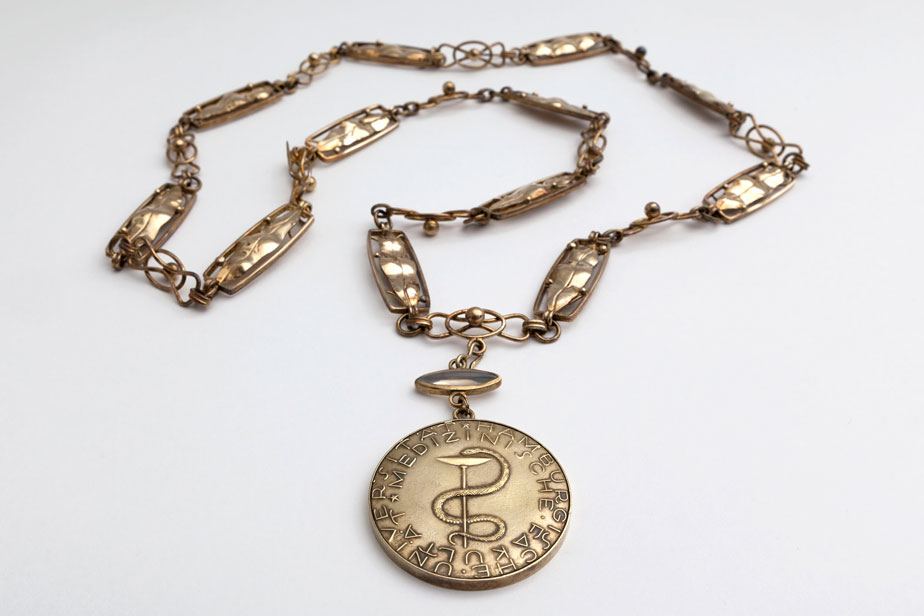 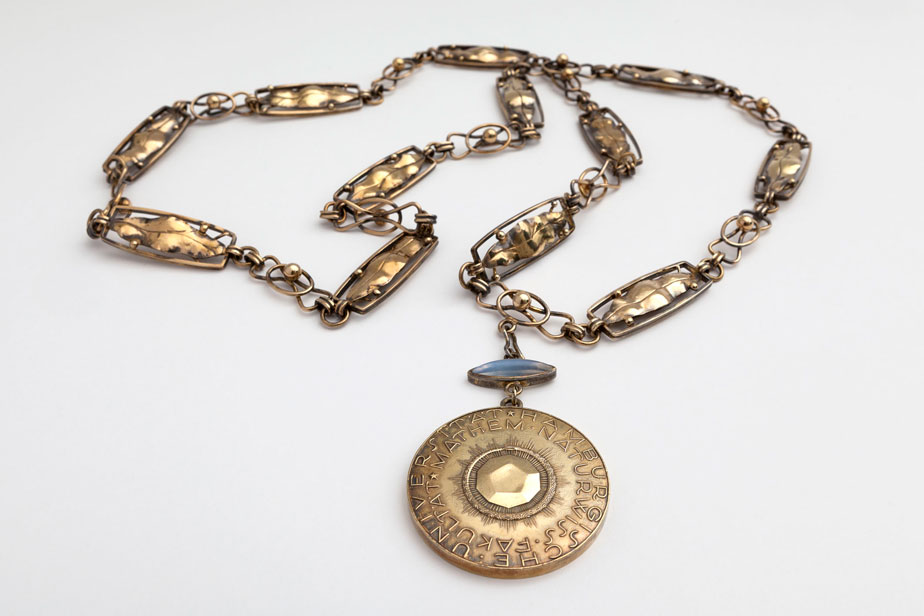 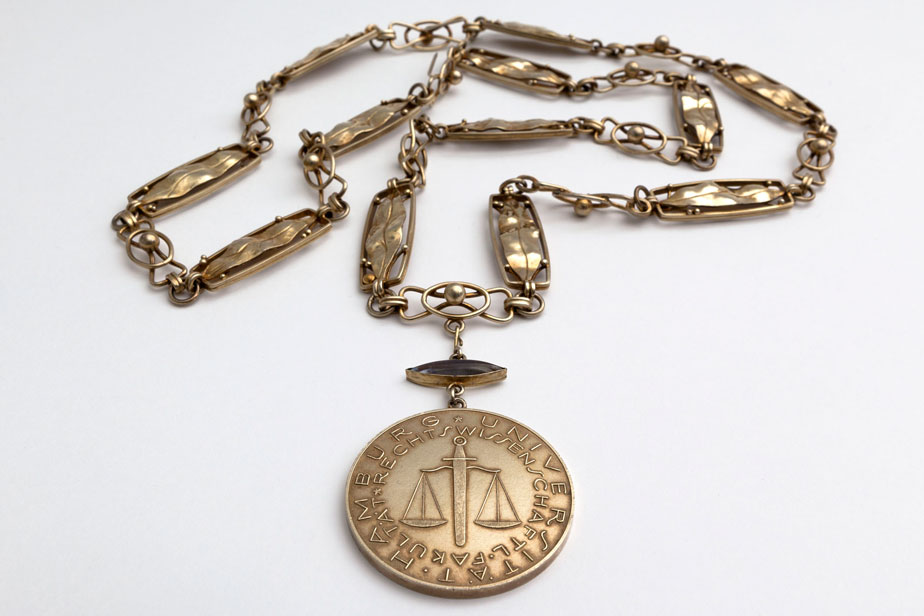 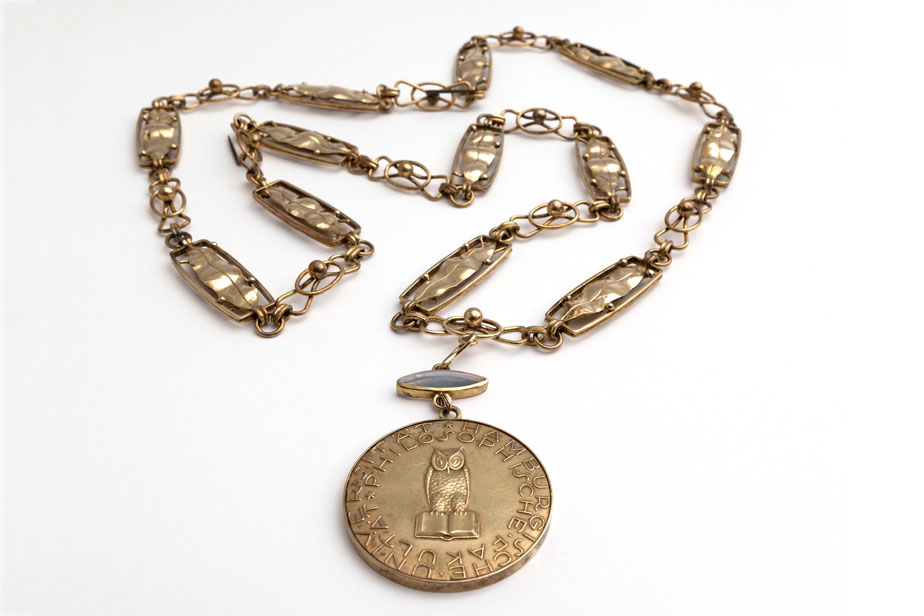 Universität Hamburg, Universitätsarchiv, Foto: Plessing/Scheiblich
Medallion for the chain of office for the deans of the faculties: Carl Otto Czeschka, 1921
0919

Even though only few professors were members of the Nazi Party in 1933, many of them agreed with the broader goals of the new regime. They hoped to see a national upswing and to overcome the tribulations of the Weimar Republic. They adapted quickly to the new circumstances and accepted the dismissals of colleagues without complaint.
Ceremony in the University auditorium, 1 May 1933
0920

Adherents of Albert Wigand, who died in 1932, regularly held memorials at his bust during the Nazi era. The meteorologist, who propounded National Socialist ideology, was rector of the University in 1931–32. His bust stood in the foyer of the Main Building until 2007, when students toppled it. 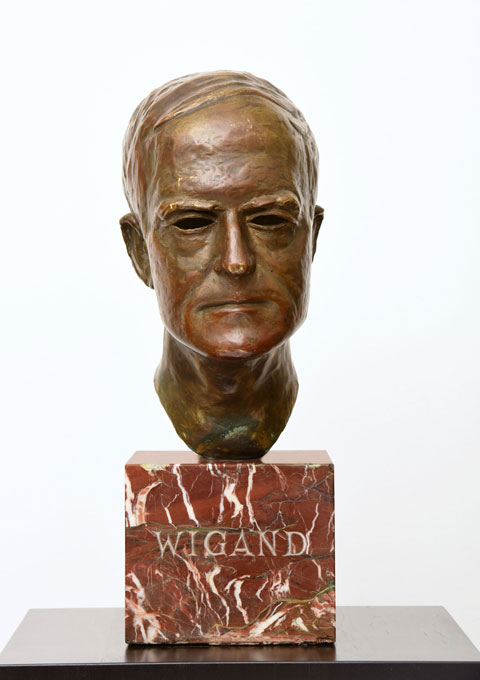 A gift for the university

The Hamburg student body presented the bust of Albert Wigand to the University at a ceremony on the Day of National Labor, 1 May 1933. Wigand was a supporter of the Nazi students. He is reported to have said he would “lead his students into a riot with banners flying.”
Article in the Hamburger Nachrichten newspaper, 26 April 1933, facsimile
0922 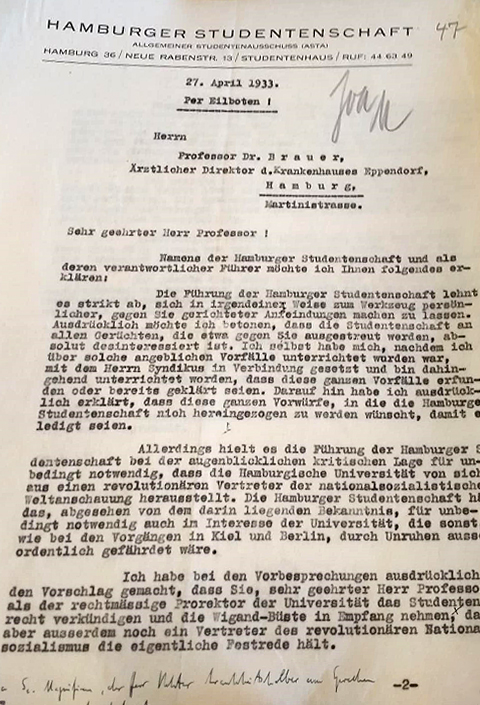 The University declared its commitment to the “national revolution” and to Adolf Hitler on 1 May 1933. The National Socialist Students’ League demanded that extraordinary professor Adolf Rein be the main speaker at the event. Prorector Ludolph Brauer was relegated to the sidelines.
Program for the ceremony on 1 May 1933, facsimile 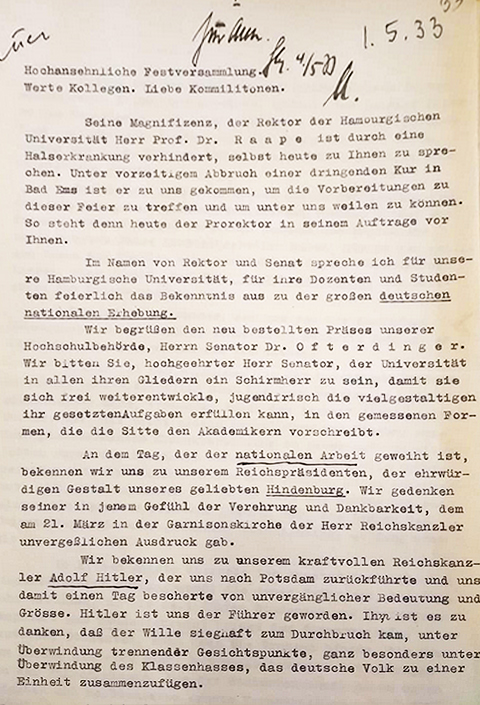 In the early 1940s, several, primarily young, Hamburg residents formed informal groups in opposition to the Nazi regime. Many of them were students at the University. Arrested in 1943–44, some died in prison. Hans Leipelt was executed. The name “Hamburg White Rose” was given to them retroactively.
Student ID cards of members of the Hamburg White Rose 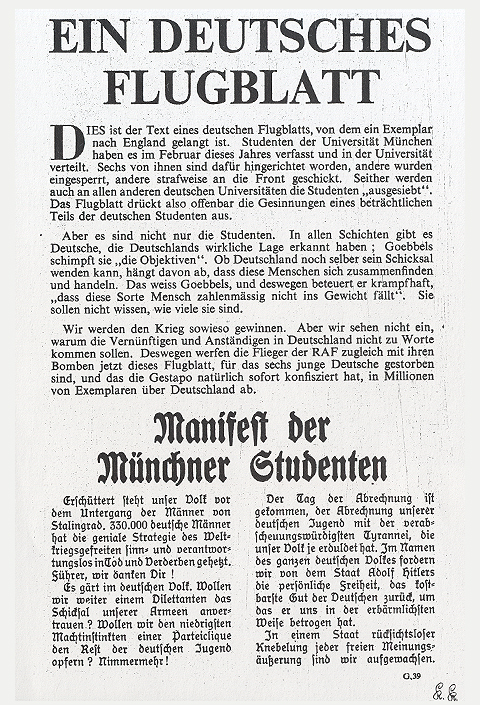 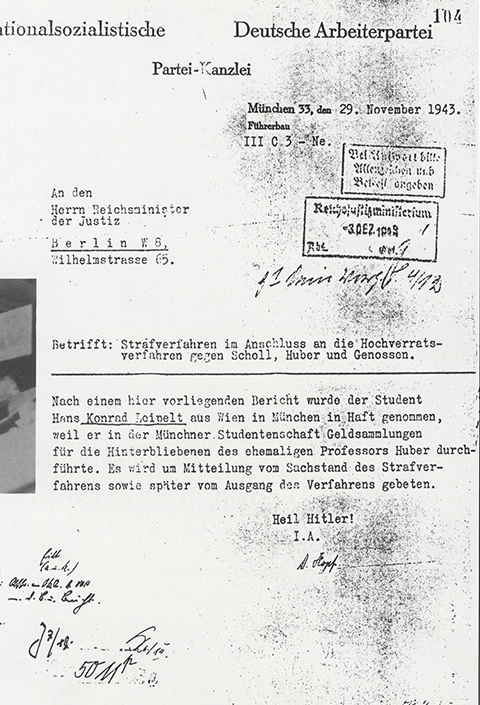