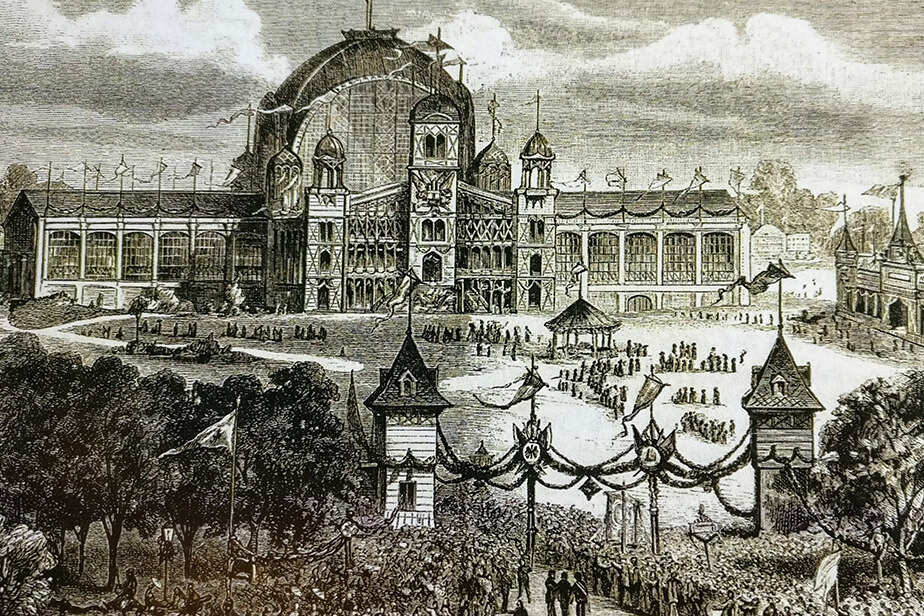 Museum für Hamburgische Geschichte
Until 1889, an iron-framed exhibition hall stood on the space where the Main Building ensemble now stands. It hailed from the Paris World Fair and was constructed in the atelier of Gustave Eiffel.

The Main Building and its East and West Wings

The large vacant area that we know today as “Moorweide” was called the “Gänseweide” (or “geese meadow”) into the 19th century. Long uncultivated, the Moorweide became home to a huge exhibition hall in 1881—at the exact spot that the University’s Main Building, with its two wings, now stands.

It was ideal for such a hall: spacious and just a stone’s throw from the Dammtor train station. These were important considerations because until the end of the 19th century, fairs played a much greater role than they do today. In a world without TV and Internet, fairs were the mass media of their day and drew many people. 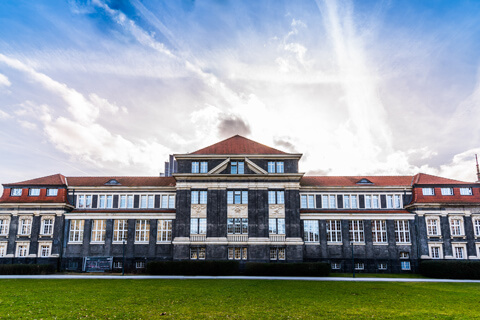 UHH/Dingler
Since 1911, the lecture building has stood right where the exhibition hall was initially erected in 1881.

This was the era of World Fairs: for the Paris World Fair in 1878, a huge exhibition hall was built on the Champ de Mars. It was a domed building designed in Gustav Eiffel’s atelier. After the World Fair closed, the hall was no longer needed, so it was taken down and sold. In 1887, the world-renowned Eiffel Tower took its place. And so it came to pass that part of the iron construction made its way to Hamburg to form the foundation for the exhibition hall on Moorweide— for just 200,000 Marks, including transport from Paris!

The hall was used only briefly, however: In 1885, a few years after its opening, parts of the building were destroyed by fire. Because the main dome had been damaged, the building could no longer be used. It was finally razed in 1889, paving the way for the construction of today’s Main Building. 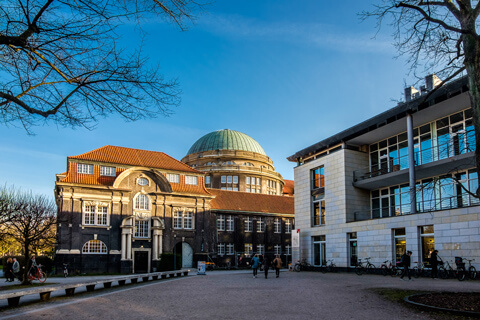 UHH/Denstorf
With its two wings, the Main Building has become a distinguishing feature of Univerisität Hamburg.

Donations to the University

The domed building had already been built and used for lectures before the University was founded. It was donated by Edmund Siemers and inaugurated in 1911. Its twelve lecture halls seated a total of 3,000 guests who attended lectures offered by the General Lecture Series or the Colonial Institute.

Like the University’s Main Building, both wings (ESA East, ESA West) were also made possible by donations. The enterprising Hamburg couple Helmut and Hannelore Greve endowed the construction on the occasion of the University’s seventy-fifth anniversary. The ribbon was cut on the West Wing in 1998, followed by the East Wing in 2002. 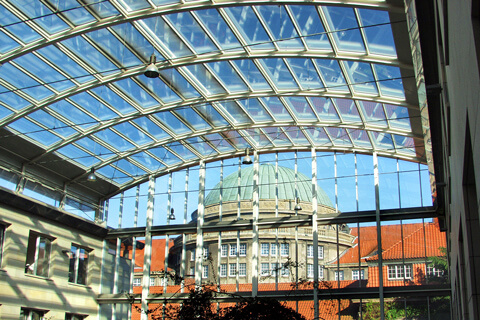 UHH/Mentz
The East and West Wings are almost identical. They were built between 1998 and 2002.

Almost identical in construction: the wings of the Main Building

Both structures boast light-filled inner courtyards with an unimpeded view of the Main Building. An 18-meter wide glass ceiling spans the entrance area. It was conceived by the architect and University graduate Folker Schneehage not just as a lobby but as a plaza with trees and cafés.

The U1 railroad line directly below the building posed a special challenge to the realization of the East Wing: it required 240 bored piles and an elaborate buffer construction to prevent the transmission of noise and vibrations.