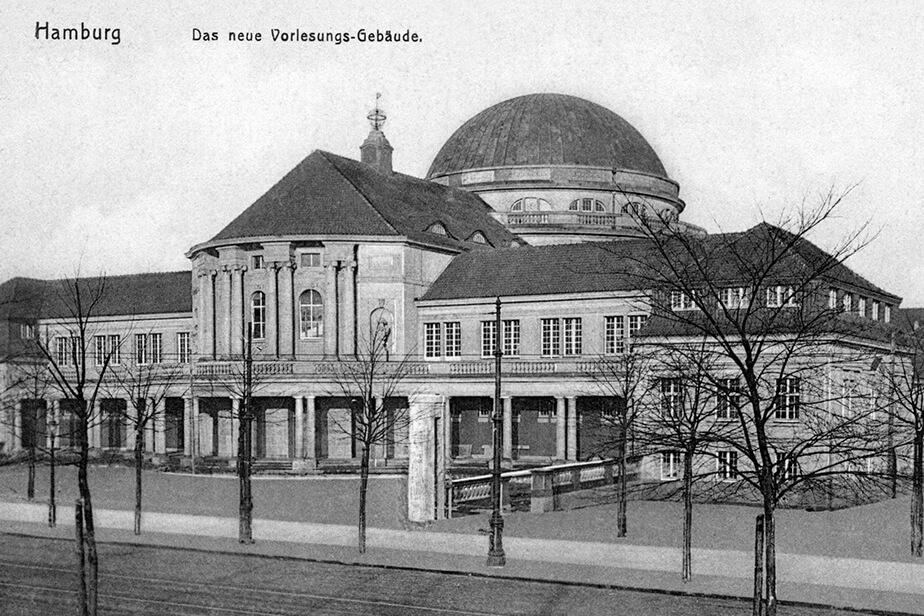 Arbeitsstelle für Universitätsgeschichte
Universität Hamburg’s Main Building was endowed by the Hamburg merchant Edmund Siemers, just a few years before the founding of Universität Hamburg in 1919. The domed building was completed in 1911 and used as a venue for the General Lecture Series. It also housed the Colonial Institute, founded in 1908. 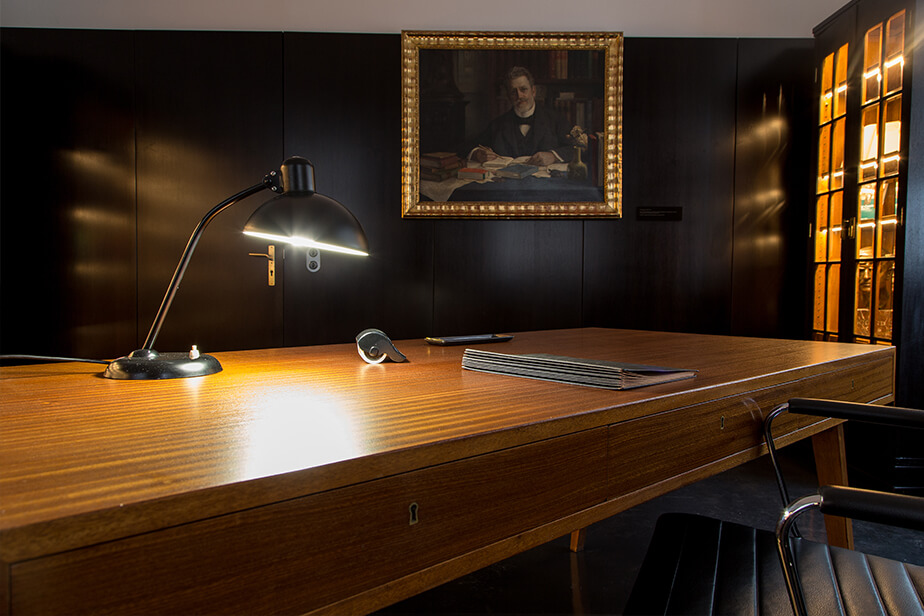 UHH/Dingler
The historical “Rector’s Room” in the Main Building provides a glimpse of the University’s eventful past. The reconstruction opened in 2015 and shows the rector’s chain of office—worn until the new presidential constitution was introduced in 1969—and the desk used by Peter Fischer-Appelt, former president of the University. 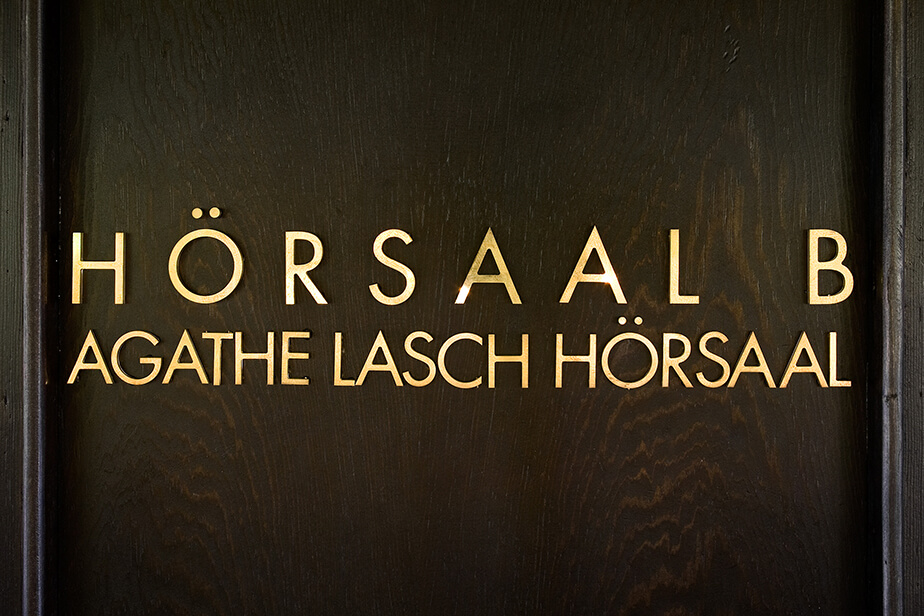 UHH/Baumann
Seven lecture halls in the Main Building are named after scientists and scholars persecuted by the Nazis: The Ernst Cassirer Lecture Hall (Lecture Hall A) The philosopher served as rector of the University for one year; the Jewish scholar fled from the Nazi threat in 1933.

People were teaching and researching in Hamburg long before the city had its own university. There were numerous scientific and academic institutions, such as the Akademische Gymnasium (founded in 1613), the Botanical Gardens (established in 1821), and the Herbarium Hamburgense (founded in 1879). Housing 1.8 million specimens, the Herbarium is one of the world’s twenty largest scientific botanical collections. 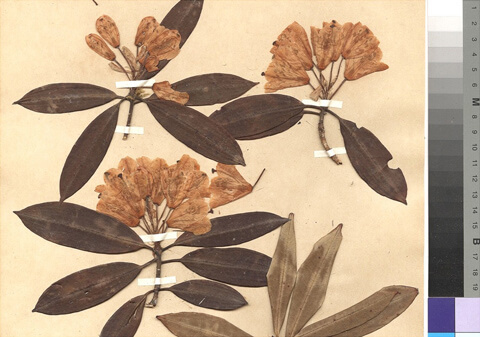 Werner von Melle and the founding of the University

For a long time, efforts to establish a university met with strong resistance on the part of Hamburg’s merchants. They saw Hamburg as a trading hub and feared both the costs of a university and competition from the mandarins for status and prestige.

Werner von Melle, elected mayor in 1915, is regarded at the University’s founding father. For many years, he plied the art of persuasion and paved the way for the University: he reformed the General Lecture Series in 1895, initiated the founding of the scientific foundation Hamburgische Wissenschaftliche Stiftung (HWS) in 1907, and created the Colonial Institute in 1908.

You’ll find yourself in the “Wandelhalle” or lobby when you first enter the Main Building. There, you’ll no doubt notice the bronze bust of Werner von Melle. Melle, who died in 1937, did not live to see the bust erected. It was only put on display in 1945, and not here, but on the landing at the end of the lobby. 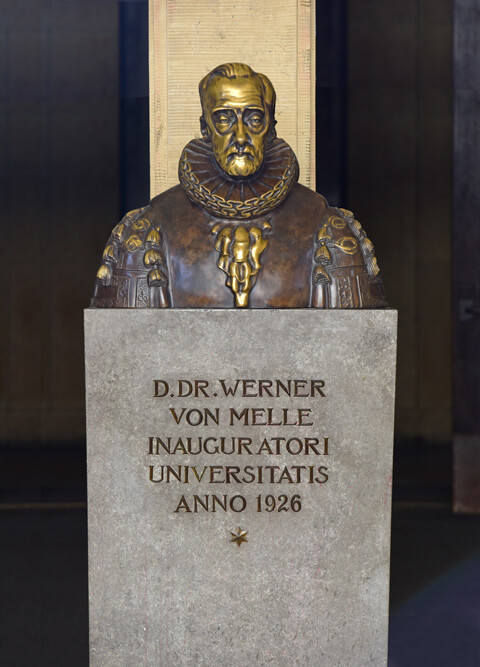 UHH/Karin Plessing/Reinhard Scheiblich
Werner von Melle is regarded as the University’s founder; his bust is on display in the lobby of the Main Building. In 1921, he was awarded the honorary title “Rector magnificus honoris causa.”

The founding of Universität Hamburg

The University was finally founded in March 1919. For the first time, the Hamburg Parliament was democratically elected and the Social Democrats had an absolute majority. During their third session, on 28 March 1919, “at 2:30 in the afternoon,” they resolved to found the Hamburgische Universität.

They further decided that the domed building near Dammtor train station would serve as the Main Building. It had been endowed by Edmund Siemers, a member of parliament, and given to the city in 1911. It quickly became the University’s landmark and is now a listed building. The rough-cast building, with its low height and Neo-Baroque design, resembles a pavilion. The architects, Hermann Distel and August Grubiz, added various features: with its four wings, the facade—a combination of Neoclassic and Baroque elements—bears a faint resemblance to a castle. The building itself is a modern construction made of reinforced concrete. 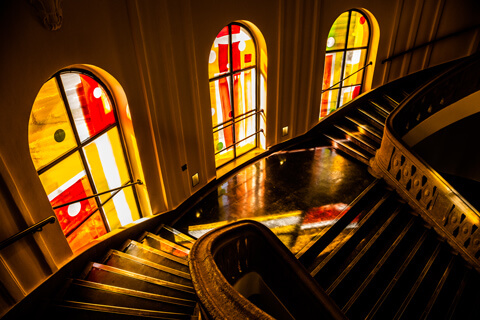 UHH/Ohme
In the building’s interior, there are several striking elements, such as the structure of the wall foundations and lunette windows—semi-circular spaces or spaces framed by a circular segment—above the doors and windows as well as ornate glass windows in the stairwells.

Twelve pairs of columns form a colonnade in front of the main entrance. The University’s mission statement is inscribed above the main door: Der Forschung | Der Lehre | Der Bildung, which means “To research, to teach, to educate and form.” 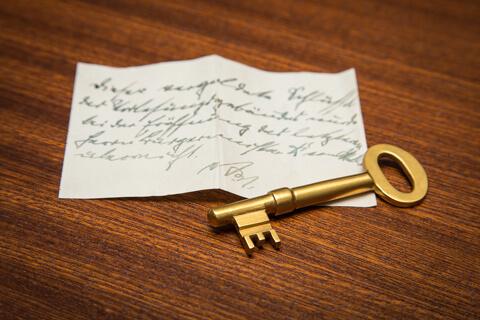 UHH/Dingler
Edmund von Siemers ceremoniously handed over the golden key to the lecture building in 1911; the key is now on display in the historical Rector’s Room. Originally, the building had twelve lecture halls for 3,000 guests.